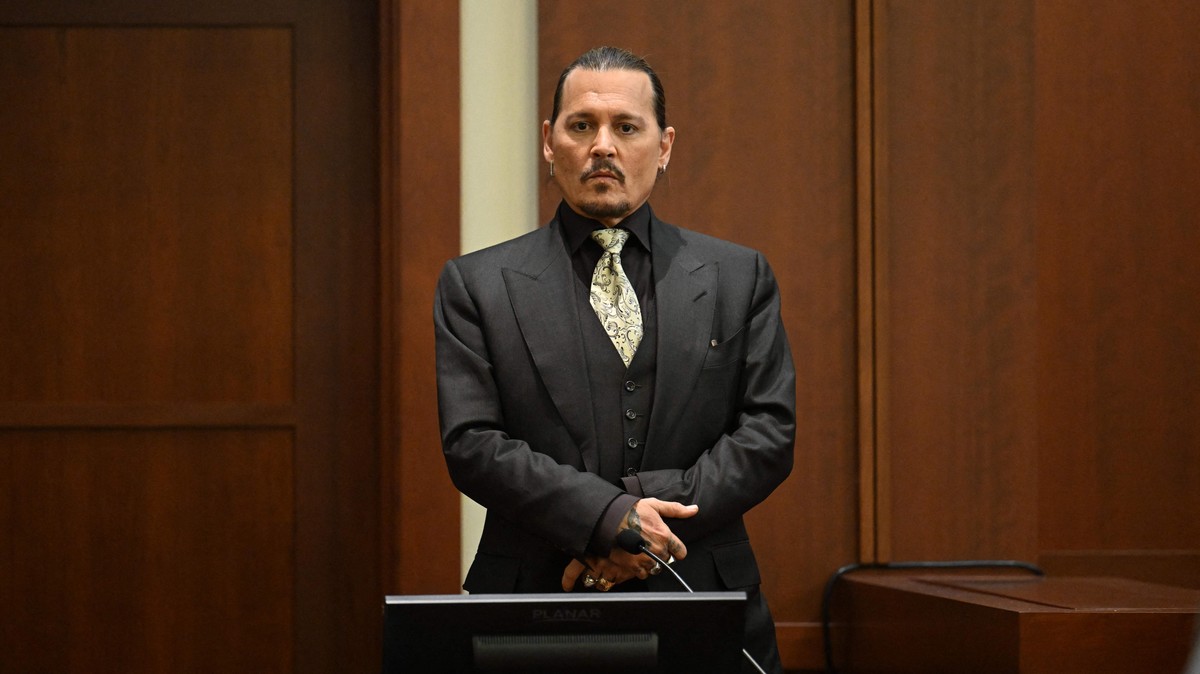 Johnny Depp on the witness stand during the defamation trial in which he is involved, at the Fairfax County Circuit Courthouse in Fairfax, Va. on April 19, 2022. (Photo: JIM WATSON/POOL/AFP via Getty Images)

On April 11, 2022, the Virginia libel trial began involving actor Johnny Depp and actress Amber Heard, who were married between 2015 and 2016. During Depp’s hearing in court, the attorney who was carrying out the interrogation he read yet another message sent by the actor to a third person, in which he spoke of Heard. “I hope that bitch’s corpse is decomposing in the trunk of a shitty honda civic,” reads the message.

Comments on YouTube (where the entire trial is broadcast live) quickly flooded the chat. The audience laughed. “LOL Honda Civic,” someone wrote.

Most of the comments online are in favor of Johnny Depp—the phrases “justice for Johnny Depp” and “free Johnny” are repeated over and over again—or, if nothing else, clearly against Amber Heard.

The two figures from the world of cinema are in dispute because Depp sued Heard for defamation for 50 million dollars, in response to an editorial published in the Washington Post in 2018 in which Heard spoke about her experiences with domestic violence. Although Heard did not name Depp in the article, Depp’s lawyers argue that he was alluding to him and that it cost the actor his career. Heard later filed an appeal for $100 million in damages, and the jury will also rule on that matter. Both people deny the abuse allegations.

The case will likely run for six weeks total and a verdict is still a long way off. But many people who are following him have in fact decreed that Depp is the real victim. “I want to give him a hug and tell him he’s going to be okay,” reads the caption of a TikTok video. For Farrah Khan, a gender justice activist, it is a situation that undermines the understanding of how abuse really evolves. Furthermore, Khan explains to VICE News, it could potentially prompt victims and survivors of abuse to remain silent for fear of repercussions similar to those Heard is experiencing now.

Comments on the trial livestream refer to Heard as a “freak” and a “Karen.” Viewers, many anonymous, accuse the actress of being “manipulative, calculating and probably a con artist,” and of “pretend crying” in the courtroom, and looking “snotty.” Other people make fun of her hair and clothes and call her “bipolar.”

“He could have killed you, he had every right to,” says a viral TikTok.

In an email with the subject line “Amber Turd” sent to the VICE News tip line, one person calls Heard a “crazy bitch” and says “Since she has a vagina and Depp has a dick, the woman has to have reason. BELIEVE ALL WOMEN!”

“We need to talk about the fact that people take less time to say she’s a liar and he’s a victim than it takes to believe a woman,” Khan says. “People are enjoying her defeat.”

Makeup brand Milani also joined in after Heard’s lawyer said the actress was using Milani’s concealer to cover up alleged bruises caused by Depp. In a video on TikTok that has been viewed about five million times, the company shows that the product in question was launched in 2017—a year after Depp and Heard divorced.

“I have never seen [un’azienda di cosmetici] talk about domestic violence, let alone do it that way,” says Khan. “The first time it happens, he’s in defense of a very powerful, older, career-starting man.”

Heard was in her 30s when she met Depp, a much older and more successful man in Hollywood. But the inherent imbalance of power between them hasn’t had as much resonance: Depp’s fans have pointed out that men can also be victims of abuse, although none of the experts concerned by the hate reactions on social media towards Heard have ever denied the fact .

“The point is not to deny that a man can suffer harm, and elements have emerged in this case which make it clear that [Heard] has done things that are not acceptable in a relationship,” Khan clarifies. “It is interesting, however, that in this conversation there is a total removal of the other parties under consideration… Why do we have to be sided, pro-Johnny Depp or pro-Amber Heard?”

An earlier trial, held in England, had already concluded that Depp had probably attacked Heard. In that case Depp had sued News Group Newspapers and the editor of the Sun, Dan Wootton, for libel, because the magazine characterized Depp as a “wife beater.” Depp lost his case in 2020 after a British court ruled the tabloid paper’s words were “essentially true.” At the time, Depp and Herd accused each other of orchestrating sophisticated public relations campaigns, and Heard accused Depp of using bots and insidious social media accounts to slander her.

Also in 2020, attorney Mark Stephens, a pundit who spoke with the Guardiansaid he received a mountain of “angry messages” after simply referencing the “sordid nature of the case.”

“I’ve seen so many high-profile trials, but never a reaction like this,” Stephens told the Guardian. “There are so many interests involved, on Depp’s side, that the online propaganda seems one-sided.”

There certainly seems to be double standards, so Depp gets a free pass after all the threatening messages that surfaced in court—like, “I’m going to fuck her charred corpse to make sure she’s really dead,” for example.

Depp’s past correspondences with Heard, her family and his own friends also reveal a person struggling with multiple addictions, who has acknowledged how substance abuse has impacted his relationships, causing him to feel remorse.

“I see a lot of ‘he’s an artist, he’s eccentric, he had a drink and drug problem,” Khan says. “Let’s leave room for people who have been through trauma and use substances to cope with it…yet as far as Heard is concerned, he’s a ‘whore’, and all the worst things in the world. This is the reason why so many people do not report the abuse they suffered.”

According to Khan, public opinion too often demands that abuse survivors be the “perfect victim,” a cookie cutter Heard doesn’t fit.

“We have this idea that victims never fight back,” Khan says. “They take the hits and do nothing in response… You must have documented any damage, but not in a way that suggests you intended to deceive anyone. You have to take the attacks and not fight back—but protect yourself enough to make a complaint.”

The “ideal victim” also tends to be a white, cisgender, heterosexual woman who has only been with her husband,” adds Khan. “A devoted wife.”

According to Khan, Heard’s bisexuality has been thrown into a double-edged sword more than once. The star was accused of infidelity and promiscuity throughout her marriage to Depp.

The problem with so much of the online narrative of what’s going on is that it fails to capture the nuances and could have real-life ramifications. Domestic abuse can also have dire consequences, while polarized positions online are providing fertile ground for groups who generally argue that women are posing as victims for ulterior motives—deliberately ignoring statistics on abuse and reporting.