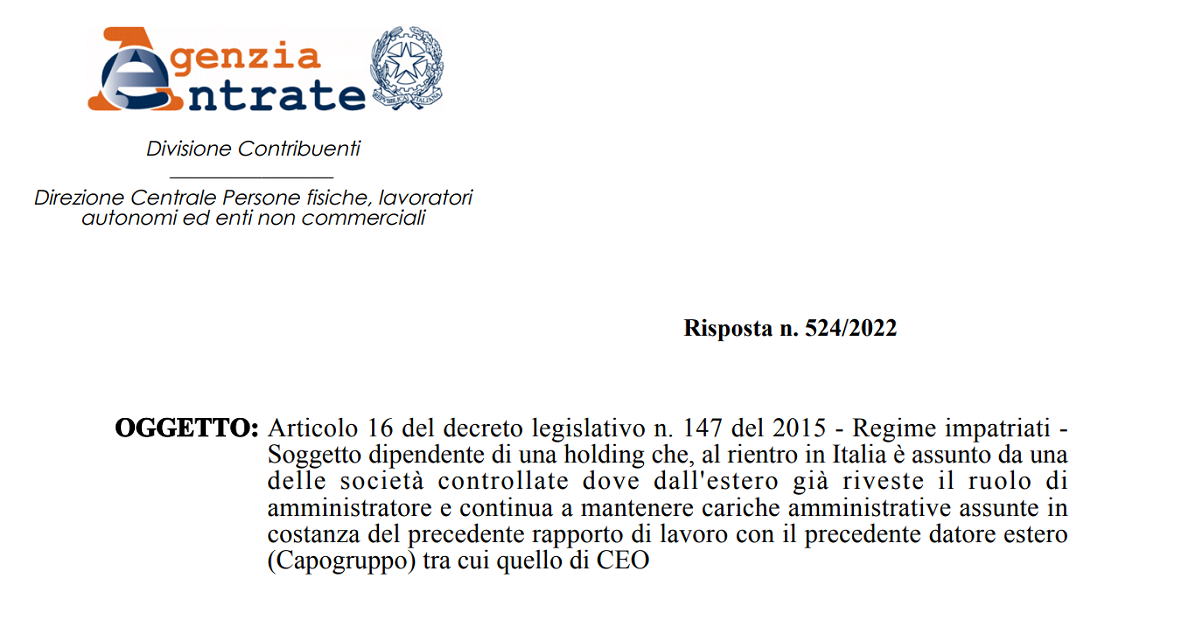 the new recruitment opens the doors of the facilities

Employee regime and corporate group: new hiring and new duties in the subsidiary allow access to benefits even in the case of previous administrative positions held for the same company. The Revenue Agency clarifies this with the response to the interrogation number 524 of 2022.

Regime of impatriates and corporate group: green light for tax breaks in the event of hiring and carrying out of new duties also for the taxpayer who is an employee of a holding company who, upon returning to Italy, works for one of the subsidiaries where he played the role of administrator and continues to maintain administrative offices hired during the previous employment relationship with the parent company.

TheRevenue Agency in response to the appeal number 524 of 25 October 2022.

As usual, the idea to shed light on the rules to be applied comes fromanalysis of a practical case.

Regime of impatriates and corporate group: green light for facilitations in the event of new recruitment

The protagonist is an Italian citizen, residing abroad since 1998. Since 2015 he has been working at the London office of una Parent company holding the role of CEO and director of two English subsidiaries and the Italian subsidiary.

The taxpayer intends to move to Italy to develop the business of the Company on the Italian territory and of new product offers at the same Italian subsidiary for which he already holds the position of director from abroad.

Since, starting in 2023, he would like to benefit from the regime impatriatesaddresses theRevenue Agency to check if you can access the 70 per cent reduction in the tax base.

The taxpayer, at the same time, specifies that there is discontinuity between the old and the new employment relationshipalso with regard to the use of holidays, bonuses, allowances.

With the response to the appeal number 524 of 25 October 2022the Revenue Agency grants its green light to the possibility of benefiting from the regime impatriates:

“Where they are satisfied all the requisites required by the standard in question, will be able to benefit from the special regime in question starting from the tax period in which he transfers his tax residence to Italy “.

Based on the provisions of article 16 of legislative decree no. 147, which regulates the regime impatriatesit is possible to access the concessions for 5 years in the presence of the following conditions:

As specified several times by the Revenue Agency, the rule does not provide for details constraints on employers:

Relevant for the case analyzed is the clarification provided with resolution number 72 of 2018:

“The autonomy of contractual relationships in the context of a corporate group with different companies located and operating in different countries does not exclude, upon the occurrence of all the other requirements required by the standard in question, the possibility of accessing special regime for expatriate workersto nothing, noting the fact that the work activity was performed with companies belonging to the same group “.

Unlike when one moves abroad for a posting and then returns to Italy, moreover, it is not necessary to check for any discontinuity which allows access to the regime for impatriates.

In light of the clarifications provided and the analysis of the legislation, moreover, the administrative charge previously covered does not represent an obstacle to the use of the facilities.

Revenue Agency – Response to the interrogation number 524 of 25 October 2022
Article 16 of the legislative decree n. 147 of 2015 – Immigrant regime – Employee of a holding company who, upon returning to Italy, is hired by one of the subsidiaries where he already holds the role of director from abroad and continues to maintain administrative positions assumed in accordance with the previous employment relationship with the previous foreign employer (Parent Company) including that of CEO

The variety offered by video games never ceases to amaze him. He loves OutRun's drifting as well as the contemplative walks of Dear Esther. Immersing himself in other worlds is an incomparable feeling for him: he understood it by playing for the first time in Shenmue.
Previous the first chapter of the series in development on Unreal Engine 5
Next Juve without Champions back to retreat? Allegri has decided