The Oregon Trail Review – the journey of hope

The Oregon Trail Review| When we think about people’s experiences, very often we refer to that tangle of ideas, thoughts, sensations and stories that distinguish each of us from the other with the term “human macrocosm”. The differences between each of us should be what unites us the mostHowever, sometimes life can be challenging, complicated, difficult. When this happens, there is very often no absolute solution or answer to the “what to do” question. Some decide to stay and face – sometimes to the end – the most demanding challenges, while others decide not to to leave, to seek fate elsewhere. The title which we will consider today – The Oregon Trail – speaks to us precisely of the story of those who challenged a wilderness, to be conquered, with the prospect of a second chance. Join us on this journey of breathtaking views, sacrifices and choleraso much cholera! 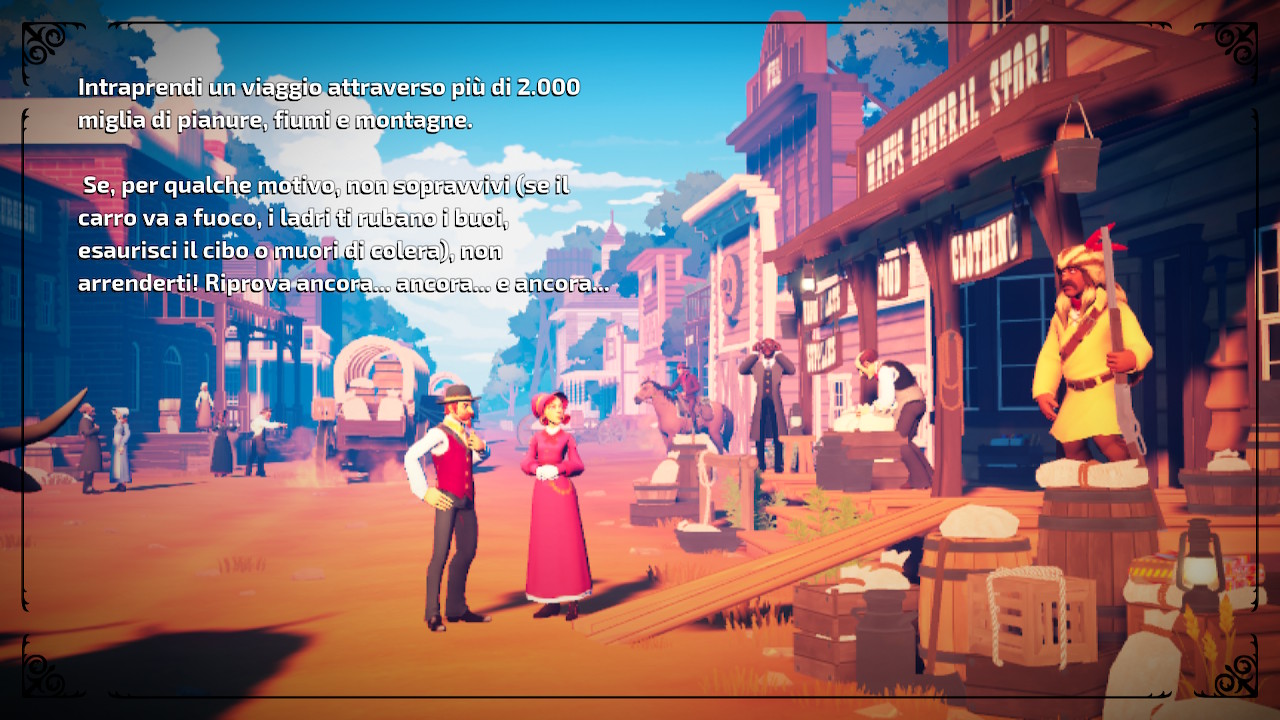 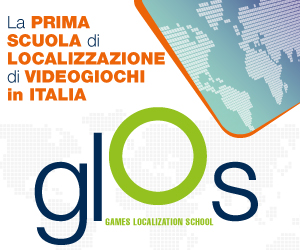 The Oregon Trail: the journey of life

The title we’re dealing with in today’s Review is exactly the same The Oregon Trail of 1971, what has been defined one of the greatest games of all time in his era. And in fact we are not too far from that period; the work is remembered because it is one of the first virtuous cases in which the videogame medium is used for educational and cultural purposes, to tell the story of thousands of men and women who braved the Oregon trail for a new life. In those days, in fact, the United States of America was still a young nation still to be built, and even in its modern revival, destined for the Nintendo Switch family in addition to Steam, Android and Apple there is no shortage of tributes to a difficult but topical period for American culture and history.

A titleThe Oregon Trail, which manages to convince and be played with pleasure even after so many years, thanks to the careful re-proposition made by Gameloft. As in the original version, we will be called upon to lead a group of four settlers along the track, having to carefully manage the preparations before the trip and the management of the crossing from stage to stage. Unlike its original version, here the aesthetic and modern improvements are clear, but in fact Gameloft does nothing but show us an example of a virtuoso remastering of an old glory from the past. In fact, The Oregon Trail is not a simple re-proposition, but almost an enrichment of the already winning experience in its original offer. 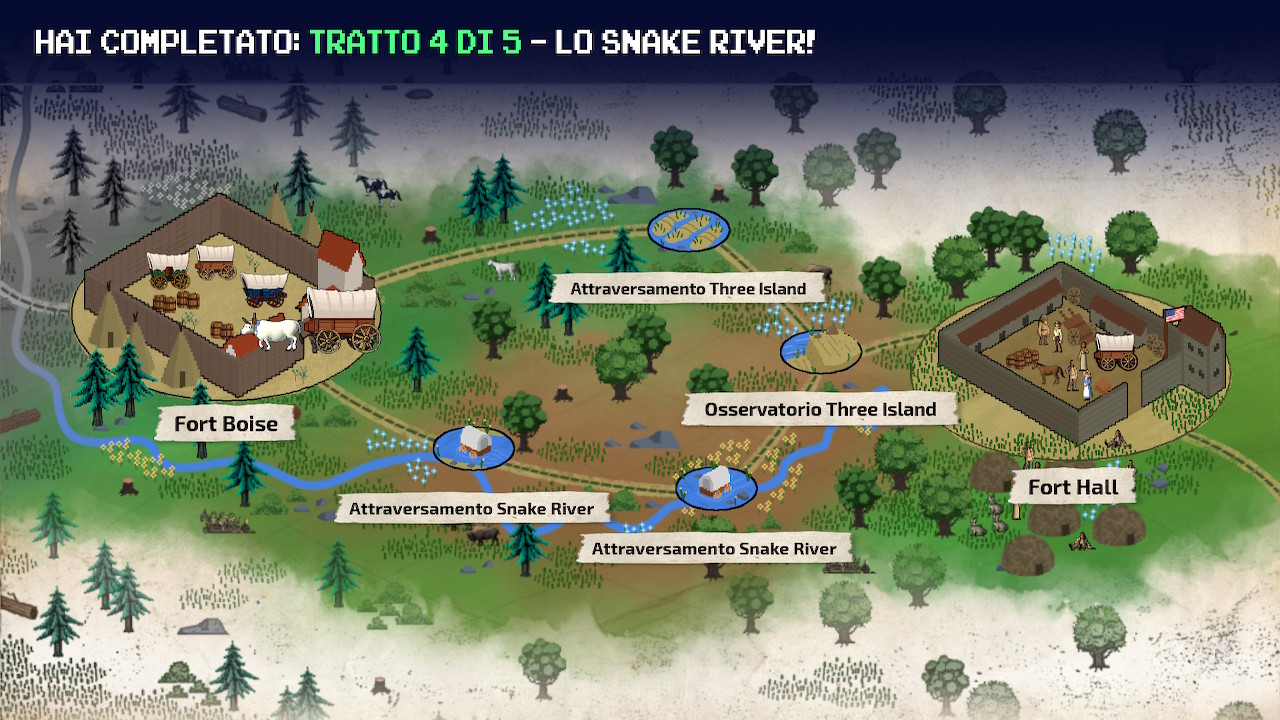 The Oregon Trail: not just survival

In its essence, The Oregon Trail it is perfectly faithful to the reality of many people who crossed the American wilderness to the coveted valleys on the American Pacific Northwest. A long and complex journey, a real challenge not only of logistics but also of humanity, in which America is experienced in its most complex and youngest period. The player is required not only to choose the route, but also the food, the distribution of clean clothes and furnishings, some with useful effects to manage the needs and morale of our travellers, each with its own psyche, strengths, weaknesses and particular knowledge.

During our travels in The Oregon Trail we find ourselves making special encounters with other adventurers like us, all faithfully reconstructed by American historical figures of the time, which will offer us side missions useful for improving our chances of success along the Oregon track. A well thought out title under the points of view, with a right balance between historical accuracy and a necessary child approach of RNG and randomness. In fact, to make the game less repetitive and more interesting to play, gameloft has adopted various measures, among which the ones we most appreciated are the activities along the track, the possibility of doing exchanges and missions for other travelers and various travel modes. Obviously, while randomness can be an element useful for improving replayabilityalso risks putting us in really difficult conditions, easily pushing our run towards the death of all the characters and the subsequent game over. 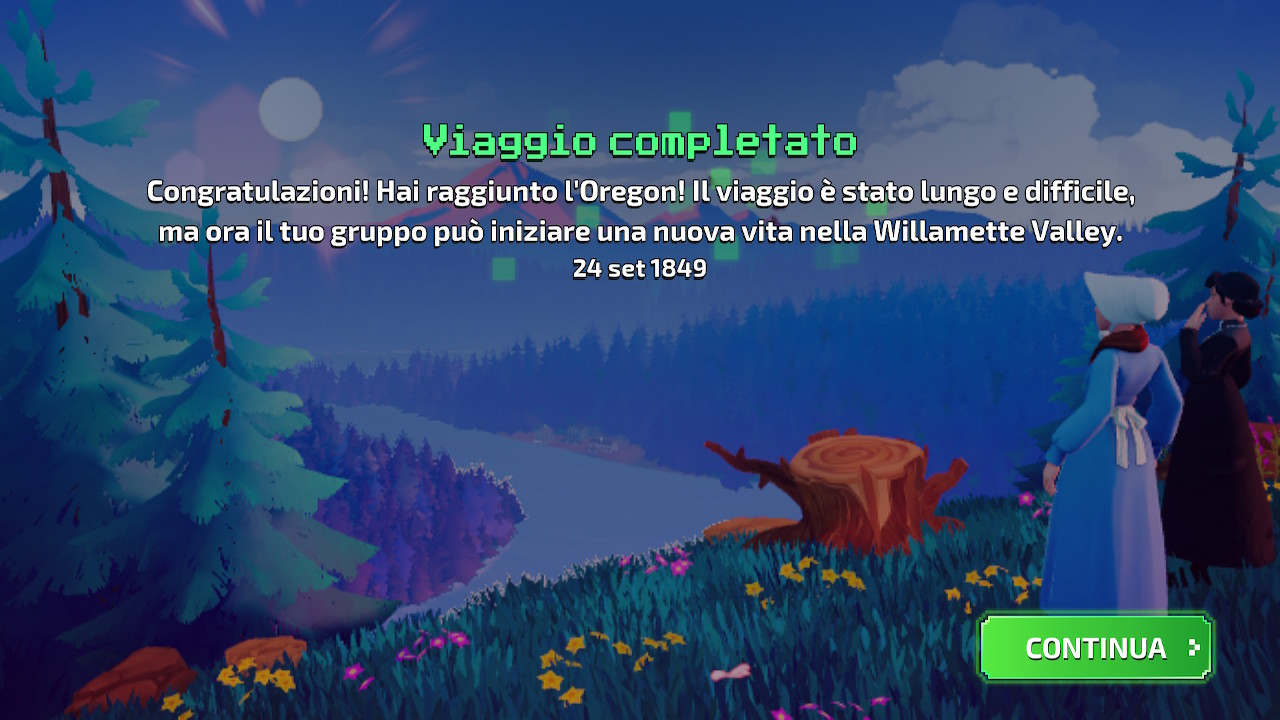 The Oregon Trail: the joy of the finish line

Our trips to The Oregon Trail will be enriched by the beauty of pixel art backgroundsvery accurate and detailed in describing the pristine nature of American trails, places full of possibilities for a new life, where danger also lurks, obviously. If we could meet good Samaritans or travelers like us in trouble, it is not impossible to meet wild beasts or bandits ready to rob us; an unknown factor that will push us to think carefully about how to organize our trip right from the start: maybe it’s a good idea to spend less on food and invest the savings on ammunition to hunt and defend the caravan? Or should we buy some lures to fish along the many rivers we will meet?

Whatever our decision will be in The Oregon Trail, we will have to in any case face the consequences of our choices and chance, which can both bring us unexpected rewards and terrible punishments: if we have not been able to meet the needs of our settlers, or if we are surprised by misfortune, you will also happen to see them die. A title that, just like works of the caliber of XCOM, manages to make us become attached to our characters, leaving us disarmed at their loss. There are few titles that manage to give similar sensations, and The Oregon Trail is certainly one of them, thanks also to the good work of the sound design and to a particularly relaxing and immersive mood.

The Oregon Trail is a work that manages to convince us, not only for its virtuosity in proposing itself after so many years, but also for a game design that works, an art direction and a sound design perfect for the purpose of the title and for the many possibilities it offers: whether you have played the original or are curious, this work will certainly be able to give you good hours of fun, if you want to challenge your luck along the Oregon tracks.

David Martin is the lead editor for Spark Chronicles. David has been working as a freelance journalist.
Previous Dangerous Profession: Aaron Taylor-Johnson in the cast of the film with Ryan Gosling
Next Camilla Pandozzi excites the city of Formia