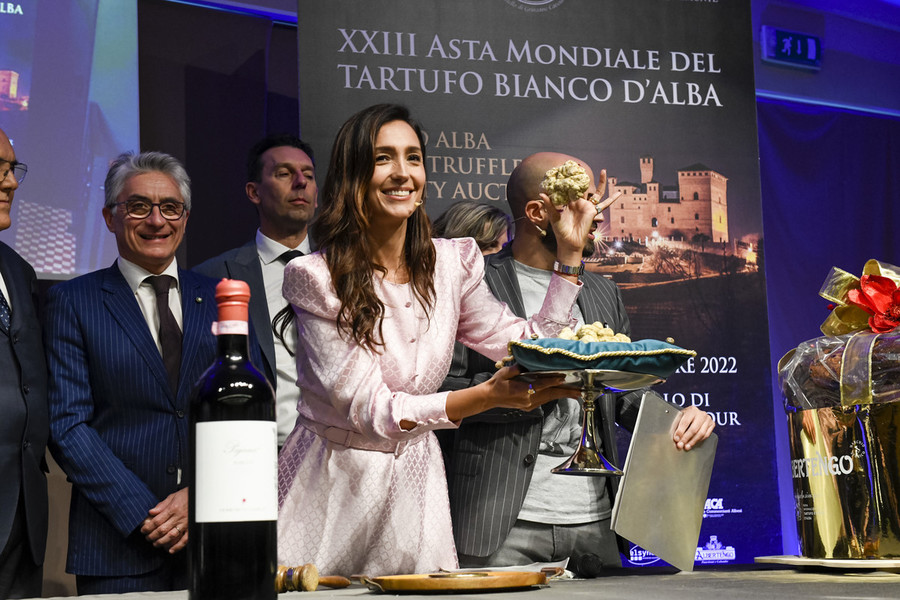 Opened by the notes of the Alter Echo string quartet, in collaboration with Alba Music Festival, the 23rd edition of the Alba White Truffle World Auction was staged from the Castle of Grinzane Cavour on the afternoon of Sunday 13 November. great charity event organized by the Cavour Piedmontese Regional Enoteca.

Competing for the finest lots of the Alba White Truffle – put up for auction in combination with the large formats of Barolo DOCG, Barbaresco DOCG and the wines of the producers belonging to the Consortium for the Protection of Barolo Barbaresco Alba Langhe and Dogliani, as well as the maxi Panettoni “Made in Piedmont” signed by the historic company of anniversary leavened products Albertengo -, philanthropists in connection with the manor that belonged to Count Camillo from Hong Kong and Singapore, now consolidated partners of the Auction, to which this year the three new, prestigious locations in Vienna, Seoul and Doha.

Thus, this year, the great appointment with solidarity – organized by the Cavour Piedmontese Regional Enoteca, thanks to the precious support of the Piedmont Region, Enit – Italian National Tourism Agency, the Langhe Monferrato Roero Tourism Agency, the International Fair of the White Truffle of Alba, of the National Center for Truffle Studies and of the Order of the Knights of the Truffle and Wines of Alba – has reached the record figure of 604,600 euros collected, which will be destined for charitable initiatives all over the world.

THE FIGURES AND THE RECORD
The protagonist of the day, the final batch consisting of a 700 gram trifola to which was added, surprisingly, a second specimen extracted in the morning of 250 grams – presented by the president of the Union of Piedmontese Trifulau Associations, Mario Aprile -, flown to Hong Kong for the record sum of 1.5 million Hong Kong dollars, corresponding to 184,000 euros: to win it, a generous local entrepreneur. Furthermore, in the dining room in Grinzane, the hammer was dropped for three other splendid specimens of Alba White Truffle, respectively 150, 255 and 330 grams, which went to the Cherasco entrepreneur Mariano Costamagna, to an anonymous London benefactress connected with a correspondent in the dining room in Grinzane, and to the entrepreneur Guido Borghi from Varese.

Furthermore, as part of the initiative proposed by the CRC Donare Foundation, represented by the president of the CRC Foundation Ezio Raviola, the assignment of the last lot of the “Barolo en Primeur” auction, the fifteen barrique of nebbiolo, from which in 2025 there will be about 300 bottles of fine Barolo DOCG, sold in the dining room in Hong Kong for the sum of 64,000 euros.

SOLIDARITY
From 1999 to today the total collection thus exceeds the ceiling of six million euros (6,343,900, to be precise), destined for solidarity projects in Italy and in the world. Benefiting from the generosity of this year’s philanthropists will be, in Italy, the Alba-Bra Onlus Hospital Foundation, the Vialli and Mauro Foundation for Research and Sport Onlus and the Every Child Is My Child Onlus project. Looking abroad, in Hong Kong the proceeds will instead go to the Mother’s Choice Institute, while Singapore has chosen the Dreams Asia foundation; on the charity front, the project chosen in Vienna is LehreUp, an initiative promoted by the Sinnbildungsstiftung, while Seoul will support the NGO World Vision.

CHARACTERS
Leading the auction in the hall in Grinzane Cavour, renewing a successful tradition, the TV presenter Caterina Balivo and the journalist and gastronomic curator Paolo Vizzari, flanked by the comedian and TV presenter Enzo Iacchetti.

Then the talented actor and director Andrea Bosca, who – after his participation in the Netflix film Toscana, shot in Chianti, and having filed his role as an established star in the Màkari series – was the protagonist of Romanzo Radicale, the Rai docufiction on the politician and activist Marco Pannella, shot by Mimmo Calopreste, just released on Rai3.

Again, the miller Fulvio Marino, who has become the “baker of Italian TV”, every day alongside Antonella Clerici on the screens of Rai Uno with the program “È semper mezzogiorno”, author of several publications in the field of bread, pizza and leavened products. Together with many other guests, also important personalities linked to the world of sport and solidarity such as Massimo Mauro, together with Gianluca Vialli recently in the capital of the Langhe to launch Alba dei Campioni, the international football tournament organized by the Vialli and Mauro Foundation for the Research and Sport Onlus.

THE PLACES IN CONNECTION
In Hong Kong the Auction was able to count on the consolidated friendship with the Three Michelin Star Chef Umberto Bombana, who – in the presence of the Consul General of Italy in Hong Kong, Carmelo Ficarra – hosted in his famous restaurant 8 ½ Otto e Mezzo Bombana , a passionate and involved audience, in collaboration with Maria Lunch and her Areté Food & Wine.

In Singapore, the auction took place in the National Gallery at the Art Restaurant led by starred Chef Daniele Sperindio, in connection with the mayor of the Municipality of Grinzane Cavour, Gianfranco Garau, and the president of the Piedmont Region, Alberto Cirio, in the presence of ‘Ambassador of Italy to Singapore Mario Andrea Vattani.

From Austria, for the first time, in the presence of the Ambassador of Italy in Vienna, Stefano Beltrame, to connect from the restaurant Le Salzgries Paris of the chef Denis Koenig, who hosted in his kitchen the next Chef of the Castle of Grinzane, Alessandro Mecca, was the Councilor for Tourism of the City of Alba, Emanuele Bolla, together with the Grand Master of the Viennese delegation of the Order of the Knights of the Truffle and Wines of Alba, Sergio Nodone and the director general of ENIT Vienna, Andrea Colonnelli .

Historic debut also for South Korea, in the presence of the Ambassador of Italy in Seoul, Federico Failla, thanks to the love for Italy of Chef “Marco” Seungchan Lee, at the helm of the Italian restaurant Atrio at the Conrad Hotel , with the Knight of the Truffle and Wines of Alba, Paolo Alberto Volpe.

The third novelty of this edition, in the presence of the Ambassador of Italy in Doha, Paolo Toschi, accompanied by the Restaurant General Manager Vincenzo Donatiello and the Specialty Head Chef Antonino D’Alessio, the connection with the Alba by Enrico Crippa restaurant, soon to be opening in Doha, Qatar, inside the iconic Katara Towers, where the three-starred Chef Enrico Crippa – fresh from the Michelin Green Star, in the dining room in Grinzane together with Roberta Ceretto – will bring his vision of original, elegant and colorful cuisine from Alba , strongly respectful of local traditions, to represent all the flavors of Italy.

THE AMBASSADOR OF THE WHITE ALBA TRUFFLE
Awarded with a special diploma by the president of the Piedmontese Regional Enoteca Cavour Roberto Bodrito, by the president of the International Alba White Truffle Fair Liliana Allena, by the Grand Master of the Order of the Knights of Truffles and Wines of Alba Tomaso Zanoletti, by the president of the ATL Langhe Monferrato Roero, Mariano Rabino, and by the councilor of the Municipality of Grinzane Cavour, Elena Grimaldi, Gabriele Boffa, Chef of the Locanda del Sant’Uffizio in Cioccaro di Penango, joined the group of ambassadors of the Alba White Truffle, standard-bearer in the world of Italian cuisine of excellence, fresh from the Second Michelin Star.

“Gabriele Boffa is a young chef from Alba who built his career as did the artists in the workshop in the Renaissance, drawing on the genius of the masters. A pupil, among others, of Yannick Alléno and Enrico Crippa, he created his own “stellar” path – awarded by the Michelin Guide for the first time in 2018 and the second a few days ago – making the Locanda del Sant’Uffizio Enrico Bartolini di Penango a place sacred of culinary art. A predestined whose cuisine is based on biodiversity and whose palette enhances the flavors and colors of the unique products of our land, among which the Alba White Truffle naturally shines”, Stated the motivation with which the recognition was awarded.

THE DECLARATIONS
Roberto Bodritopresident of the Cavour Piedmontese Regional Enoteca: “The World Auction of the Alba White Truffle is confirmed as an exceptionally long-lived and interesting event, crucial for the promotion of the territory. Through the prestigious international connections, testimonies of the excellence that distinguishes the uniqueness of Alba, Langhe and Roero are proposed and important solidarity actions are encouraged. Today we are celebrating a great new charity event that will cross borders, in times when – elsewhere – borders are being violated. Never as in this edition, together with the mayors of the City of Alba, Carlo Bo, and of the Municipality of Grinzane Cavour, Gianfranco Garau, we want to launch a message of peace and brotherhood and the means to do so are once again our food and wine excellences led by our wonderful Alba White Truffles, Barolo and Barbaresco“.

Matteo Ascheripresident of the Consortium for the Protection of Barolo Barbaresco Alba Langhe and Dogliani: “Barolo, Barbaresco and Tartufo are the perfect trinomial that represents our territory in the world: three excellences that have deep roots in the Langhe and that act as a driving force for our entire tourism and wine tourism system. It is for this reason that we continue to support this initiative and that our producers offer their prestigious bottles in combination with lots of the Alba White Truffle. The enhancement and promotion of our territory also pass through these initiatives that have an international scope: the Truffle Auction and the ‘Barolo en primeur’ auction, in which the values ​​of solidarity are combined with territorial promotion thanks also to the contribution given with municipal lots donated by our producers“.

Fabio Carossovice president of the Piedmont Region: “The Truffle Auction represents one of the most anticipated moments of autumn in Piedmont. Always an opportunity to consolidate international ties with those who are in love with our land and our Unesco hills. Il Tartufo is a splendid ambassador of our Piedmont and one of the most important of Made in Italy, for this reason it deserves special attention, reserved for it with connections from all over the world. We have many people who, thanks to their solidarity contribution, will be able to help those who really need it, enjoying the intoxicating scents of the Truffle“.

Videogames entered his life in the late '80s, at the time of the first meeting with Super Mario Bros, and even today they make it a permanent part, after almost 30 years. Pros and defects: he manages to finish Super Mario Bros in less than 5 minutes but he has never finished Final Fight with a credit ... he's still trying.
Previous Milan-Fiorentina, Rebic-Terracciano contact: Viola anger
Next Jennifer Aniston wore Courteney Cox’s dress in ‘Friends’ after twenty years