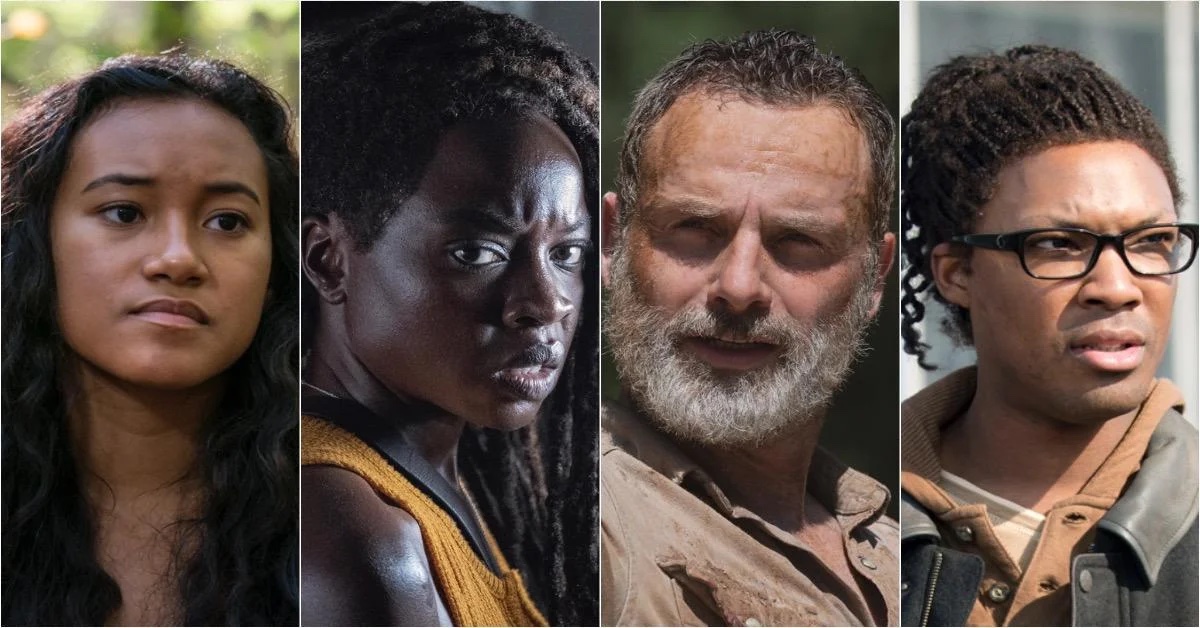 The Walking Dead: all the loose ends one step away from the finale!

Everything can be summed up in the immortal words spoken by the late Abraham Ford: “Unfinished business makes my ass itch”. There is only one episode left of The Walking Dead, which will end in seven days with the final episode entitled “Rest in Peace”. Even with the extended runtime of the series finale, there are just too many loose ends to tie up and questions to answer before The Walking Dead wraps up on Nov. 21.

The following contains spoilers for The Walking Dead Season 11, Episode 23, “Family,” which premieres Monday, November 14 on Disney+ in the UK.

Especially after yesterday’s penultimate episode ended with a cliffhanger that ended all cliffhangers: the survivors, gathered one last time to free the Commonwealththey found themselves trapped between an army of the living and an undead horde.

We’ve put together a list of loose ends and unresolved storylines ahead of The Walking Dead’s series finale, which airs on Disney+ in Italy starting Monday, November 21.

In the season 9 episode “What Comes After,” Rick Grimes (Andrew Lincoln) saved his family of survivors of the zombie apocalypse from a horde, sacrificing his life to blow up a bridge that connected the communities. But Rick is not dead. As revealed in The Walking Dead: World Beyond, Jadis/Anne (Pollyanna McIntosh) switched Rick to the Civic Republic Army after flying off with him in a CRM helicopter last episode. After that The Walking Dead jumped six years into the future following the presumed death of Rickwe learned the destination of the helicopter: the Civic Republic in Philadelphiain Pennsylvania.

What will happen next? Rick Grimes will return in the series finale of The Walking Dead? Scott Gimple, executive producer of the series and chief content officer of AMC’s The Walking Dead universe, has hinted at a post-credits scene that could reveal where it is Rick ahead of the spin-off Rick Grimes & Michonnewhich will start filming in early 2023. But don’t expect Rick to show up and save the day at the Commonwealth.

What happened to Michonne?

Six years after the disappearance of Rick, Michonne (Danai Gurira) came across the evidence that Rick survived and decided to bring the “brave ex-sheriff” home to their children: Rick “RJ” Grimes Jr. (Antony Azor) e Judith Grimes (Cailey Fleming). Last we saw Michonne in the season 10 episode “What We Become,” he followed a massive migration of survivors as he headed north in search of Rick.

Alone Judith knows the truth about the mission of Michonne to find Ricksaying to Daryl (Norman Reedus) e Carol (Melissa McBride) that Michonne “went to help people she met.” Since the Season 11 episode “Family,” Judith has been unable to reach her mother by radio. Unless Michonne makes a cameo in a possible post-credits scene, her answers about her journey won’t come until her return to the series. Rick Grimes & Michonne arriving in 2023.

What caused the zombie apocalypse in The Walking Dead?

Doctor Edwin Jenner (Noah Emmerich), a virologist at the Atlanta CDC, and a team of French scientists were among those who conducted research on the Wildfire Virus, the global epidemic of a zombie virus of unknown origin. “We are all infected”he whispers Jenner to Rickrevealing that all carriers who die without brain damage transform, even without a zombie bite.

In The Walking Dead: World Beyondthe CRM conducted experiments to slow down the resuscitation process under the Votus project. Milton Mamet (Dallas Roberts) of The Walking Dead and Dr Leo Bennett (Joe Holt) of World Beyond are just two of the scientists who have studied the undead, but the origin of the epidemic will not be revealed in The Walking Dead.

“I’ve never actually been interested in dealing with the cause of the zombie outbreak,” creator Robert Kirkman explained in The Walking Dead Deluxe #41. “My view has been well documented, but the short version is that… any detailed explanation would push things too far into the realm of science fiction for me. I think it’s best left unsolved. That way, the story remains grounded.”

Did Heath die on The Walking Dead?

Even if he was never a major character, fans want to know: what happened to Heath? The resident of Alexandria Heath (Corey Hawkins) hasn’t been seen since he disappeared during a supply mission with Tara (Alanna Masterson) in the Season 7 episode “Swear,” which aired November 2016. Still untraceable after more than six years, Heath has left behind only his glasses, tire tracks from an RV and a mysterious note with the letters “PP extension“.

Showrunner Angela Kang later confirmed that Jadis traded Heath for CRM, just like she did for Rick Grimes. As for Heath’s fate? It depends on whether Heath is marked with the letter “A” or with the “B”.

In the anthology series Tales of the Walking Dead, Davon (Jessie T. Usher) has her card”PP extension“. What’s the link?

Where is Georgie in The Walking Dead?

Another character we no longer hear about is Georgie (Jayne Atkinson), the bespectacled do-gooder who only appeared once: in the Season 8 episode “The Key.” Together with her traveling companions, the twins Hilda and Madge (Kim and Misty Ormison), Georgie has exchanged with Maggie (Lauren Cohan), leader of the Hilltop, a “key to the future” to build her colony in exchange for goods and supplies. The nomadic trio traveled by van, looking for communities that could benefit from his “book of medieval human conquests, so we can have a future from our past”.

It was assumed that Georgie had ties to the leader of the Pioneers, Virginia (Colby Minifie) in Fear the Walking Dead, set in Texas at the time. In The Walking Dead season 10 episode “Home Sweet Home,” Maggie revealed that she left the Hilltop with the group of Georgie after that Rick decided to spare Negan (Jeffrey Dean Morgan).

Maggie last saw Georgie in Knoxville, Tennessee before Georgie and the twins headed to a western town. Maggie she stayed with her son Hershel (Kien Michael Spiller) and eventually settled in Meridian. When the town near Knoxville fell, Maggie and Hershel ran away and have not seen Georgie since.

Is Lance Hornsby connected to CRM?

When Carol made an agreement with the Commonwealth Governor Pamela Milton (Laila Robins) to blame her son’s crimes on the double agent Lance Hornsby (Josh Hamilton), the latter cryptically warned Milton: “If something happens to me, certain alliances that the Commonwealth has, certain stabilizing factors, could become a problem”.

This could mean an alliance with the army of Civic Republic, the group took Rick. Hornsby and Governor Milton have made “exiles” disappear into labor camps and are well stocked with soldier armor, vehicles, weapons and even a working train: it could be the CRM supplying the Commonwealth?

What happened to Cyndie on The Walking Dead?

After a long absence from the show, Luke (Dan Fogler) e Jules (Alex Sgambati) are finally back to reveal the fate of Oceanside after the soldiers of Hornsby they have taken over the lonely fishing community. Oceanside is “gone,” Luke said, while Jules added that the Commonwealth “has taken over.”

Luke and Jules escaped to safety, leaving the fate of characters such as unknown Rachel (Avianna Mynhier) e Cyndie (Sydney Park), and other Oceanside residents. Last we saw Cyndiespared the intruder Virgil (Kevin Carroll) as part of a deal with Michonne.

What happened to Virgil?

Virgil was present when Michonne found evidence that Rick was alive after traveling to the island of Bloodsworth in the Maryland looking for weapons to turn the tide of War of the Whisperers. Virgil and Michonne they separated when she headed north to find Rick and he returned to Oceansidefinding Connie (Lauren Ridloff) in the episode “A Certain Doom”.

Season 11 revealed that Virgil he moved into one Alexandria destroyed by the storm, where he is reunited with Judith in “For Blood” (aired October 2021). He told Judith he didn’t know where she went Michonnebut now the question is: where is Virgil? At this point, it is likely the unexplained absence of Virgil doesn’t have a weight in the finale, but maybe there’s still something to discover about Rick and Michonne?

The Walking Dead series finale will be available to stream on Disney+ starting Monday, November 21, 2022.

David Martin is the lead editor for Spark Chronicles. David has been working as a freelance journalist.
Previous Assassin’s Creed 2 PC Free Download Full Version
Next Are Emily Ratajkowski and Pete Davidson Dating? What we know about the (alleged) new couple