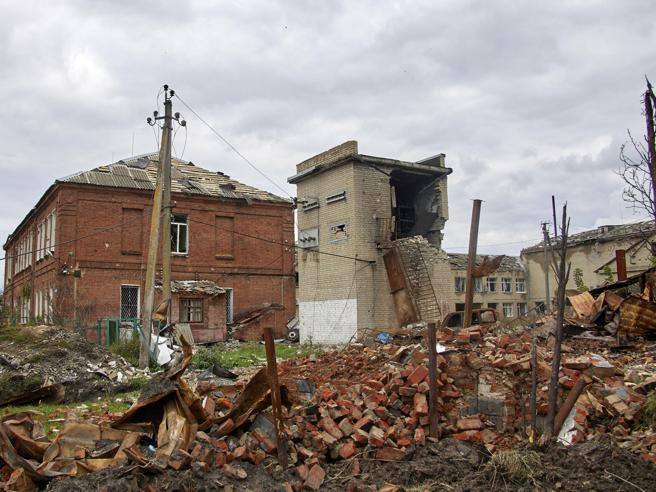 from The Corriere della Sera and the Corriere.it website are out today and tomorrow without the signatures of journalists due to trade union agitation

The news of Thursday 6 October, live. The Ukrainian advance continues in the Kherson region, in the south, and in the east of the country

• The war in Ukraine has reached its 225th day.
• According to US intelligence, the Ukrainian government is behind the murder of Darya Dugina, daughter of Alexander Dugin, the ideologue behind Vladimir Putin’s ultra-nationalist policies.
• The Kiev army advances into the Kherson area. Here the video reportage from the front line

10:03 am – New explosions in Zaporizhzhia

Three loud explosions were recently heard in Zaporizhzhia as columns of smoke are seen rising from the city center. The Guardian reports it. Meanwhile, city governor Oleksandr Starukh urged residents of the region’s capital to stay in shelters, posting on Telegram to announce another enemy missile attack.

09:58 – Intelligence Gb: Kiev advances but does not yet crack the Russian defense

The counter-offensive and advance of Ukrainian forces in the south of the country continues according to the latest update of British intelligence regarding developments on the ground, with the forces of Kiev pushing the front another 20 kilometers on the south side of the country but which do not yet cleave the Russian defense positions. The Guardian reports it. According to the report, therefore, Russian forces have generally cut off contact and withdrew, but now have a dilemma: whether to withdraw troops across the Dnipro River to defend the rest of the Kherson region, or to stay and defend the area.

A week after the meeting between Russian President Vladimir Putin and Belarusian colleague Aleksandr Lukashenko, the Moscow government announced a loan to Belarus for import substitution – measures to deal with Western sanctions. A clear will of support for the only country that stands alongside Russia in the war against Ukraine. The decision made can be read in the Russian media. The agreement has been signed or will be signed shortly. The volume of $ 1.5 billion, RIA Novosti reports quoting Deputy Prime Minister Alexei Overchuk

Russia has deported more than 1.6 million Ukrainian citizens from the territories occupied since the beginning of the war. The denunciation of President Volodymyr Zelensky, who spoke about it during his speech broadcast on video at the meeting of the Organization of American States. We have no doubt that we will win this war and will be able to protect Ukraine’s independence. Daily victories at the front and dozens of liberated towns and villages in Ukraine prove it, he said. But, he asked himself, how many Ukrainians will be killed before Russia admits its defeat? More than 1.6 million Ukrainians have already been deported to Russia, and many of them have passed through the terrible filter camps of the occupiers, where they have been mocked and intimidated. We are doing everything we can to put an end to the long list of Ukrainian victims that Russia is creating. But we still need your support to accelerate the arrival of peace for our people, the president said.

09:09 – Kiev: two dead in the Russian attack in Zaporizhzhia

A missile attack on the city of Zaporizhzhia caused at least two deaths early this morning, but rescuers are still working to try to save the people, at least 5, who are under the rubble of the buildings destroyed by the bombs. as reported by Oleksandr Starukh, head of the military administration of the region. Many people were rescued. Among them there is also a three-year-old girl, said Starukh quoted by the UNIAN agency. According to Ukrainian information, 16 missiles hit the city this morning.

Ukraine today claimed the continuation of its advance in the “autumn offensive” in the south and east of the country at the expense of Russian forces. Oleksyi Reznikov, the Kiev defense minister, wrote in a tweet: While the ‘Russian parliament’ intoxicated by futile attempts at annexation, our soldiers continue to advance. This is the best answer to each and every “referenda”, decrees, treaties and pathetic speeches. According to President Volodymyr Zelenski, Ukrainian forces have produced a rapid advance in the past week by taking back dozens of villages in the Russian-occupied region.

08:01 am – Russian kamikaze drones over Odessa and Mykolaiv regions

Ukrainian air defense units shot down six Russian kamikaze drones (out of a total of 12) that had attacked the regions of Odessa and Mykolaiv in the night: the southern operational command of Kiev has announced, according to reports Ukrinform. During the night attack by kamikaze drones in the Odessa and Mykolaiv regions, according to preliminary data, six drones were shot down by the air defense forces, the Command reported, stressing that the enemy has intensified aerial reconnaissance.

The Russian army launched a missile attack on the city of Zaporizhzhia (south) this morning, hitting infrastructure and residential buildings: the head of the regional military administration, Oleksandr Starukh, said the news, according to Ukrinform. The occupier attacked the regional center with missiles. The enemy’s targets were infrastructure, Starukh wrote on Telegram, adding that several explosions were heard and residential buildings were destroyed in the city. As a result of the enemy attacks – he pointed out – fires broke out … The exact number of victims is not yet known.

The bodies of two men, aged between 30 and 35, were found by the Ukrainian police in the village of Novoplatonivka, in the eastern region of Kharkiv, freed in recent days by the forces of Kiev: their hands were tied together with handcuffs. they had gunshot wounds to the head, were dressed in civilian clothes. The bodies were discovered in a sand pit four meters deep. UNIAN reports it. Ukrainian media have published pictures of the place of the find. According to the police, 250-350 Russian special forces were stationed in the village. Their rotation took place periodically. Employees of the investigation and operations teams gathered evidence, police said.

Ukrainian President Volodymyr Zelensky, who is currently overseeing a counter-offensive against Moscow forces, will connect via video link from Kiev. His prime minister will replace him in the talks. Europe is facing its biggest crisis since World War II. And we faced it together with unity and determination, British Prime Minister Liz Truss will tell his fellow leaders. We must continue to stand firm, to ensure that Ukraine wins this war, but also to address the strategic challenges it has exposed. Despite the rhetoric, few concrete results are expected from the summit. France said it hopes to define a potential space for cooperation between leaders on the protection of critical European infrastructure such as gas pipelines, cyber security and energy supplies. EU officials expect to agree to hold a community follow-up gathering in six months in a country outside the bloc, with Britain and Moldova both offering to host.

04:12 – Russian bombs on Khariv. A fire breaks out, no casualties

Russian forces struck an infrastructure in the Osnovyanskyi district of Kharkiv (north-east) overnight, according to the Kyiv Independent, the mayor of the city, Ihor Terekhov. A fire broke out on the site, added Terekhov, stressing that at the moment there is no news of injuries or victims.

Videogames entered his life in the late '80s, at the time of the first meeting with Super Mario Bros, and even today they make it a permanent part, after almost 30 years. Pros and defects: he manages to finish Super Mario Bros in less than 5 minutes but he has never finished Final Fight with a credit ... he's still trying.
Previous Juve, another Italian swoops on Parisi: the details
Next Fantastic 4, Stranger Things’ Dacre Montgomery is the Human Torch in the new fan art!