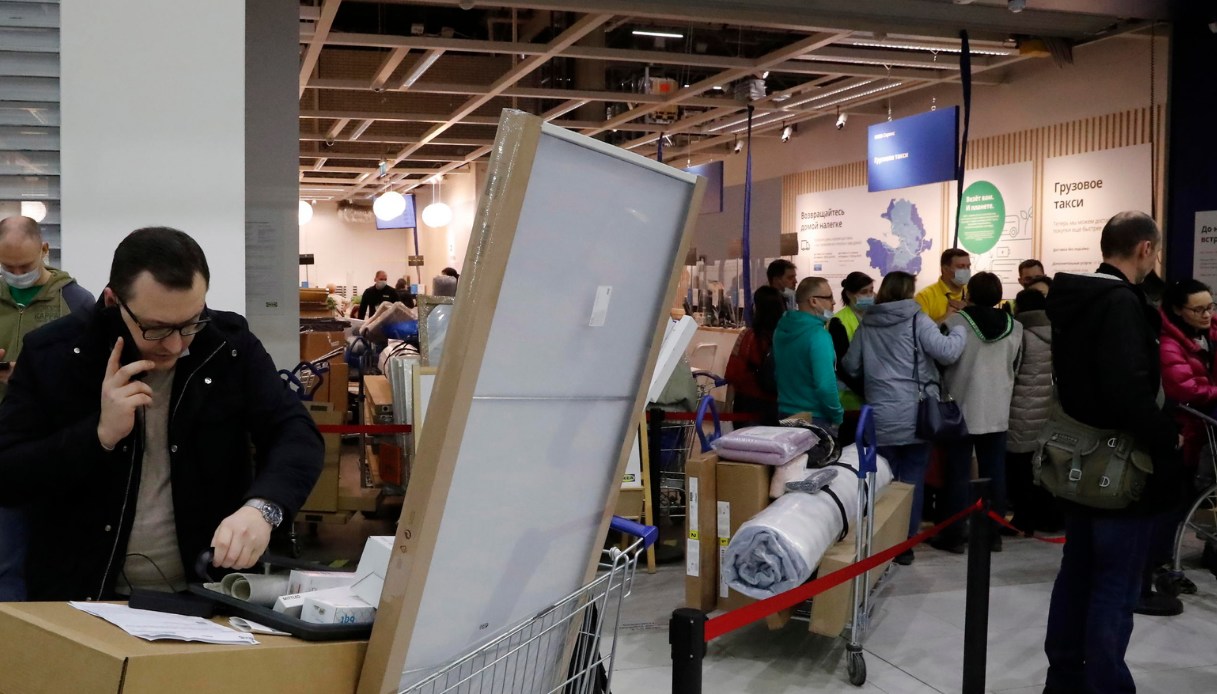 Endless queues in front of hypermarkets, outlets stormed and emptied by customers: it is the reaction of the Russians to the news of the closure of Ikea stores, in the images that come from the country in the last few hours. The Swedish multinational is not the only one to abandon Russia: day after day, several dozen major brands have decided to suspend their commercial activities as a direct response to the Ukrainian invasion of Moscow or as a result of the sanctions against the Kremlin and the consequences of war.

“The devastating war in Ukraine is a human tragedy and our deepest empathy and concern are for the millions of people affected” is the statement from the Swedish furniture giant, which announces thesuspension of its activities in the Russian market (here we wrote about the other big brands that are leaving Russia).

“The immediate actions of Inter Ikea Group and Ingka Group were aimed at supporting the safety of Ikea employees and their families, which we will continue to do,” it reads.

“War has a huge human impact and also causes serious disruptions to the production and commercial chain, which is why the group companies have decided to temporarily suspend Ikea’s activities in Russia“, Said in a statement the group, which in the country employs 15,000 employees, 17 stores and three production plants (here we talked about the stop to sales of the auto giants in Russia).

The furniture giant then added that it had decided to “temporarily suspend operations” both in Russia and also in Belarusin connection with the war in Ukraine, while shopping malls in Russia operating under the Mega brand will remain open, it is explained, to ensure that many people have access to their daily needs and essential items such as food, groceries and pharmacies (here we talked about the great financial crisis that is hitting Russia).

“These decisions have a direct impact on 15,000 Ikea employees. The actions of the groups are long-term, the commitment is aimed at ensuring employment and income stability for the immediate future and providing support to them and their families in the two countries ”, the Swedish multinational wrote again.

In the press release in which it freezes not only production, but also sales and shipments, the company also announced a donation of 37 million euros (approx.400 million Swedish kronor) to help refugees from war.

Through the Ikea Foundation, the company donated 20 million euros for humanitarian assistance to people forced to flee due to the conflict in Ukraine, in response to an emergency appeal by UNHCR, the United Nations refugee agency.

Inter Ikea Group and Ingka Group also announced their intention to allocate 10 million euros each to provide support with their own products and other forms of assistance to UNHCR, Save the Children and other organizations operating in local markets.

“The situation is extremely critical and rapidly evolving. Corporate groups have as a priority to work in the best interests of the people and communities involved in the conflict ”, reads the company’s press release.

He likes dogs, pizza and popcorn. Already a fanboy of Nintendo and Sony, but today throws anything. He has collaborated on sites and magazines such as GameBlast, Nintendo World, Hero and Portal Pop, but today is dedicated exclusively to Spark Chronicles.
Previous Serie A: in the field Bologna-Turin 0-0, Fiorentina-Verona 1-1 and Venice-Sassuolo 1-3 – Sport
Next the dates of the switch off, some channels change