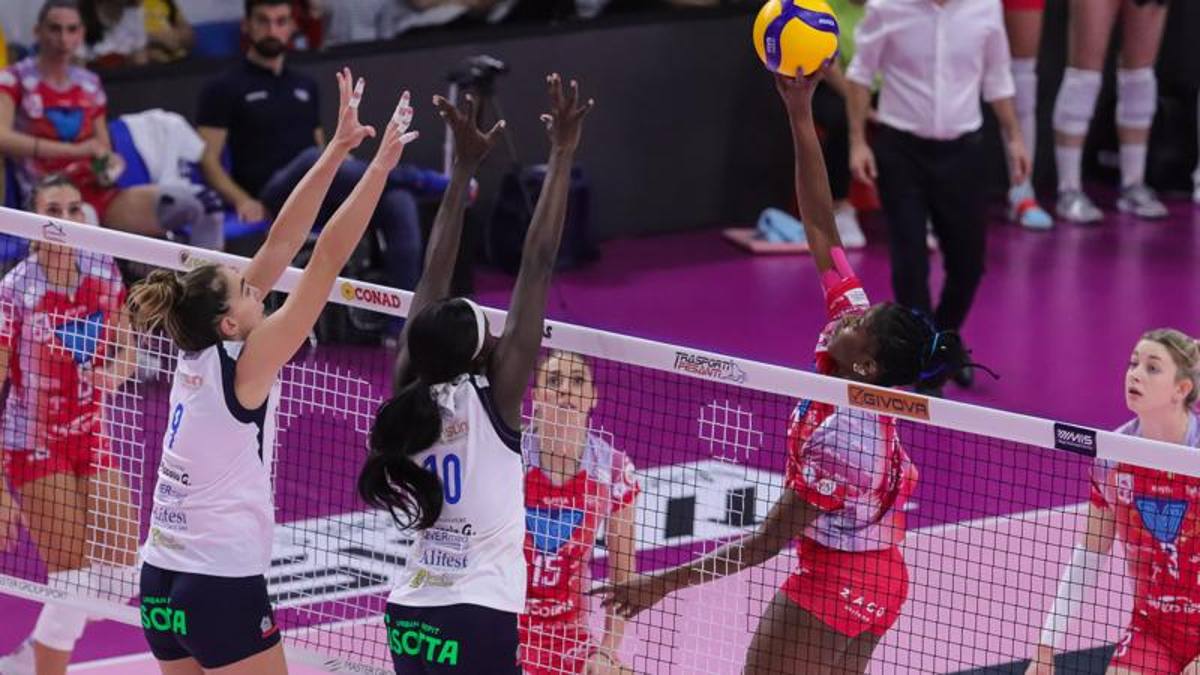 Wins away from home for Imoco, Vero Volley and Igor but leaving a point behind. Savino with Antropova does not struggle with Vallefoglia. Bergamo overwhelms Florence

Second day of the championship with Conegliano, Novara and Milan winning at the tie break. Tomorrow the Piedmontese derby Cuneo-Chieri closes the day

In the midweek round of the championship the multiple Italian champions of the Prosecco Doc Imoco Conegliano, ahead two sets, must sweat more than expected to tame the vehement comeback of the hosts of the e-work Busto Arsizio at the three-break. ‘Arena e-work, coach Musso, deprived of the setter Lloyd (still out due to a back pain), recovers captain Olivotto in the starting six, fresh out of a degree in Communication Sciences in the morning. On the Veneto front, the new world champion with Serbia Daniele Santarelli shuffles the cards a bit, initially leaving the bench Gennari (rewarded in the pre-game for the past in the Bustocca shirt) and Plummer. In front of Francesca Marcon, the start is all of the guest brand (3-7); Degradi leads the red and white comeback, turning the inertia of the set up to 21-16. With the former Omoruyi doing good and bad weather, Conegliano reacts as a great team (Gray, author of 6 points, is a lot of stuff), while Busto crumbles on the most beautiful: 23-25 ​​in 29 ‘rewards the character of Wolosz and companions. The e-work accuses the backlash (9-14), while Lubian and Robinson inflict decisive points in the decisive moments. The Venetian fans – about forty in Lombardy – can thus toast to the encore of their Prosecco: in 18-25 in 26 ‘only Rosamaria (7 points in the set like Haak) tries to counter the domination of the panthers. The Brazilian from Uyba does not want to give up, just as Squarcini and Gray do not loosen their grip. After Plummer’s block of 20 all, however, it is Lualdi’s points and the two decisive winning serves by Olivotto that make the difference: the 25-22 in 24 ‘is reflected in the newfound offensive verve Bustocca (73%). The home crowd makes itself felt, Lualdi demonstrates personality. And even if the Imoco is always the Imoco (20 all), Busto deserves the tie-break on Degradi’s attack which is worth 25-22 in 27 ‘In the pit of the e-work Arena, the butterflies turn on the ‘8-4, but Conegliano – on Gennari’s turn to serve – overturns everything in an amen (8-9). Haak’s walls (top scorer with 27 points, 5 more than Rosamaria) do the rest: he finishes 10-15 in 18 ‘, after two hours of exciting volleyball (Mattia Brazzelli Lualdi)

A perfect symphony. It is the one played by Savino Del Bene Scandicci who dominated from start to finish against the Megabox Ondulati Del Savio Vallefoglia. A 3-0 determined by practically identical partials at least in terms of performance. Excellent start, very decisive, by Savino Del Bene Scandicci who exploits a few mistakes too many in the service of the opponents and the good start of Belien and Antropova in attack, to stretch and manage the advantage in the best possible way. Timid reaction in the mid-set of Vallefoglia, entrusted to Piani, but it’s just a flash in the pan. Sorokaite walls Lutz (entered in the final of the fraction just in place of Piani) and thus ends the first set on the score of 25-18. Scandicci returns to the field presenting Malinov and Pietrini from the beginning in place of Di Iulio and Sorakaite respectively. And the monologue of the home team continues, which has two very effective terminals in Pietrini and Antropova. In Vallefoglia nothing or almost nothing succeeds. D’Odorico and Piani try to do something but it is really very little to be able to keep up with this Savino Del Bene who has so many valid alternatives to exploit. Di Pietrini the winning diagonal that fixes the partial score at 25-14. Those who expect a reaction at least in the third set of Vallefoglia are disappointed because even this portion of the game continues along the lines of the first two. Malinov manages to make his team run perfectly, Antropova grinds more points (in the end there will be 17, including 3 blocks and 3 aces). Pietrini is surgical, while Vallefoglia never finds Kosheleva (out of the race) and gradually loses Piani, too, the last one to raise the white flag. Angeloni made the final point with an experience block-out that made Scandicci jump to the top with full points. While Vallefoglia remains nailed to two points, those obtained thanks to the victory at the tie break against Cuneo. (Stefano Del Corona)

Milan wins, forecasts, but who struggles with Casalmaggiore who at one point hoped to take another heavy scalp on his internal debut at PalaRadi, as already happened last year with Scandicci at the first at home. Casalmaggiore recovers Carlini and this is enough to see a different team compared to the debut. In the first set the Trasporti Pesanti also leads by 3 thanks to Perinelli on the wall and Malual in attack, but the connection of Milan at 20 with a point far from easy by Stysiak starts the comeback, seasoned by the first wall ( of seven) by Folie and closed by Stevanovic after taking advantage of Sonia Cambi’s batting turn. The second partial is the clearest: Milan dominates it from the ace of Orro which is worth 7-12 onwards, while Casalmaggiore reveals problems in reception that dirty the good (39%) percentage in attack of the first set. Milan, perhaps unconsciously, relaxes and Casalmaggiore has the merit of believing it: no one tears but the squads remain there until Malual draws the wall out of 17-13 which directs the final. Casalmaggiore in fact has the weapon of patience (and defense), extends almost all the exchanges and closes ahead. Of the fourth set, in addition to a great Davyskiba, to Folie who continues to dominate against the wall and to De Bortoli who gives defense lessons, the final must be told: Folie makes 22-23, a challenge requested by Pistola and highly contested by the former Gaspari limelight the context until 24-23, then Sylla’s mistake leads everyone to the tie break. Sylla wants to make up for it and dominates the fifth set between defense and counterattack: at 5-2 the furrow is already important and Milan with experience (also signed by Folie and Stysiak) takes it home. (Giovanni Gardani)

Bergamo cancels the “logical” setback with Conegliano and liquidates Florence. Tuscans too ugly to be true, Orobic on the ball and decided from the first exchanges with the usual Lanier (21 balls on the ground) on the cover, Cecchetto (67% in reception with 60 of perfect) in the wake of the best and a character to underline. To nail the first hour to forget for the guests the percentages in attack (26-27%) against 40-50 are enough. Lanier puts 13 in 60 ‘, Herbots-Van Gestel-Nwakalor 12 in three. If fed up and companions make 1-0 changing pace close to 20, in the second period they place a 9-2 (19-10) that smells of encore in fluency. Micoli, who had made him catch his breath with profit on 22-17, does it again in the third on 6-9. The outcome is different, the rossoblùs drop, Il Bisonte shakes by putting the + 5 with Frosini who enters Lorrayna and despite a couple of naivete the change proves decisive. Because place 2 crowns the long chase with the hook at an altitude of 23 before the one-two from Partenio delivers three well-deserved points to Bergamo. On the opposite front, perhaps too much to review, in every respect. But the championship is just at dawn and there is no shortage of time to cancel certain evenings. (Federico Errante)

Novara still without Poulter (problems with an ankle could be back as early as next day) struggling a bit ‘to dispose of the newly promoted Pinerolo, light in attack (Zago alone is not enough). The Igor starts in a thousand with Karakurt inspired (9 points in the first set), effective in service, Battistoni manages to manage the game well. Pinerolo struggles in reception and, apart from Zago, does not find great outlets in attack. In the second set Pinerolo starts better and leads up to 9-11 then Karakurt’s turn to serve breaks Pinerolo’s positive moment. The freshman, however, is not discouraged, the reception has increased and Prandi is able to make the ball travel faster. Lavarini inserts Carcaces for Adams but the Igor struggles and does not recover the disadvantage. Uphill departure also in the third for Chirichella and her companions, then slowly the higher quality comes out and Pinerolo is unable to keep up with the pace, especially in reception. Then Novara burns everything: Pinerolo presses back to the wall and takes the point to point at the end. In the fourth set Pinerolo sees Grajber grow, Novara tries to rebuild. Leads with a lot of effort and closes defending the minimum advantage. Then he also wins the tie break

The Apennine derby is the prerogative of Macerata who thus celebrates his home debut in A1 with a suffered but deserved success, in the sign of Fiesoli (mvp) and Malik decisive offensive terminals and a wall higher than that of the Umbrians. Bartoccini was able to reopen the challenge in the third thanks to Lazic but paid for the discontinuity during the match and the too many mistakes committed especially in an unplayed second set. First set in control by Macerata, thanks above all to the attacking prowess of captain Fiesoli and the central Molinaro: partial that always sees the Marche ahead, who in the middle of the set give the decisive acceleration with three consecutive points from Fiesoli that breaks the resistance of the Umbrian whose run stops at a set ball canceled out of the four conquered by the Marche. In the second set there is no reaction from the Umbrians, on the contrary it is Macerata who pushes even more in service and in attack and it is late at night for Bertini’s girls who sink (13-3), they also collect a partial 12-0, making a mistake everything you can and undergoing the game of the opponents, which have grown even more than the first partial. Bartoccini’s desperate comeback attempt when the set was now largely compromised is not enough. Umbrians, however, who react to the great in the third, regaining efficiency in attack and defense: they lead a whole set played point by point, reject the comeback from the Marche and with Lazic close the set and go back into the game. In the third Macerata is preferred to the block, finds the brilliance in attack of Abbot and goes to conquer a precious three-point success. (Mauro Giustozzi)

David Martin is the lead editor for Spark Chronicles. David has been working as a freelance journalist.
Previous BTP ITALIA, the instrument that protects against inflation, to be issued from 14 to 17 November. …
Next Ukraine, Kadyrov calls for “jihad in which everyone must participate”