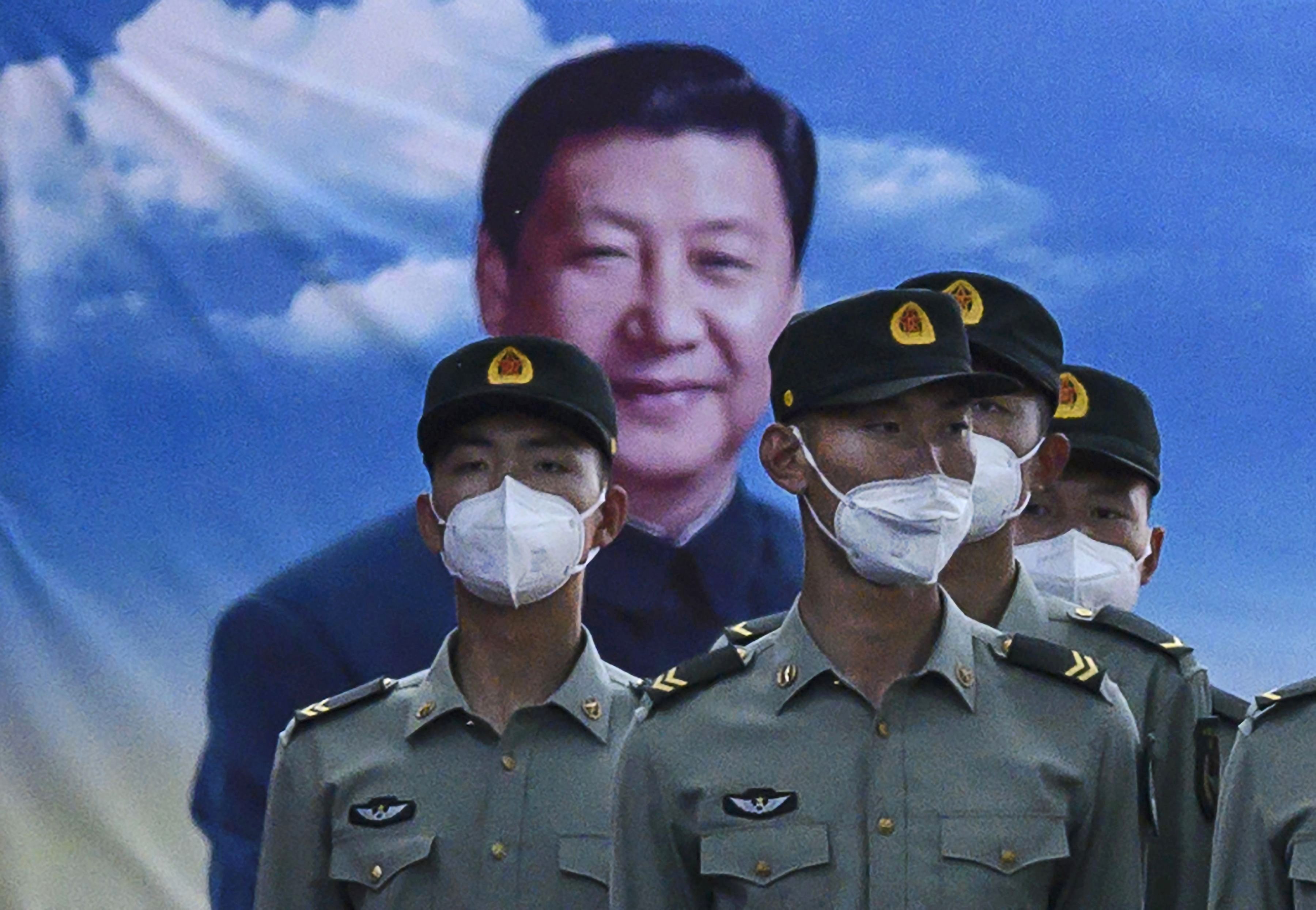 What does it mean that China is preparing for war

“Preparing for War” reported the headlines of the major global newspapers talking about Xi Jinping’s new speech to his army. In what terms did the Chinese President speak of war? Is this the first time this has happened? How are China and the US moving? Are we facing an imminent armed confrontation?

After being re-elected for the third time becoming the longest-serving president since Mao, on Tuesday Xi Jinping carried out an inspection at the command center of the Central Military Commission (CMC) in order to “Prepare for combat” and to implement the new guidelines of the 20th Congress which spoke of a “dangerous storm” on the way.

“Focus energies on combat and work hard to improve the ability to win,” Xi said, because “in an unstable and uncertain situation” the military should “resolutely defend national sovereignty and national security.” Does this mean that Beijing is preparing for an impending war in the Pacific, with its devastating global consequences?

To answer this question it is certainly necessary to take a step back, both in terms of tone and timing. First of all, while most Western newspapers carry the word “war” (zhanzheng, 战争) in their titles, the one used most frequently by Xi was “combat” (zhandou, 战斗), which may have the value of “battle”, but also of “Clash”, a term that has been widely used for years in narrating Sino-American relations from both hemispheres.

Egypt, the big absentees (from China to Greta Thunberg) and the energy crisis: what to expect from Cop27

Furthermore, the first time Xi ordered his army to prepare for the conflict was in 2013, in the aftermath of his first election. According to official documents, however, the first time that the current Chinese President inspected the Cmc command center was in April 2016. In that and subsequent visits, his rhetoric has always focused on “military strength. “,” Combat preparedness “and” national security “. It has happened every year, with increasing intensity it is true, but it is not a novelty anyway.

In fact, during his opening speech to the Congress, Xi used the word “security” 50 times and the word “fight” (douzheng, 斗争) 17 times, which linked to a continuous recourse to the dialectic of humiliation historical carried out by Western abuses, it often recalls the Maoist emphasis on the “class struggle” to fight against imperialism and foreign influence. A crusade, the one against foreigners, which has always characterized Xi’s work.

However, it should be borne in mind that, since the Korean War that followed World War II, China has never actually invaded other countries or waged its own war, either directly or by proxy. As stated by military expert Li Jie on the pages of the Global Times (English version of the party newspaper, Renmin Ribao): “working for combat readiness does not mean being belligerent, all countries are preparing in the neighborhood and China does not exception, especially in today’s increasingly tense situation “.

For Song Zhongping, another Chinese military expert, “the only way to ensure that there is no war is to have the strength to win a war”, phrase that rests on the old philosophy of Sun Zi and “The art of war”, for which reaching direct combat is already a defeat in itself as you have not been able to convince your opponent of your unquestionable superiority by other means.

Hard power of a new era

Therefore, if in 2013 Xi Jinping brought Chinese foreign policy from a “low profile” to an approach – in the words of the scholar Yan Xuetong – of “achievement of objectives”, now we can say that the new era of Xi will not be just “soft power”.

According to Willy Lam, a scholar with the Jamestown Foundation in Washington, the Chinese President “is sending a message to the United States and Taiwan. Although their military strength still does not equal that of America, Xi’s decision-making process is not always based on rational choices ”.

In fact, net of the ten-year drills, aerial invasions and alarms on Taiwan, the tensions around the island have reached the levels of a new crisis and the establishment of a “new normal” that could generate devastating and unpredictable outcomes.

The Vessel of the Pacific

For the American Indo-Pacific Commando (INDOPACOM), in 2025, China is expected to overtake US military forces in the Pacific region. For Washington intelligence, China – which considers Formosa as a matter of domestic politics – is actively working to take back the island, but has also postponed this possibility to 2030, believing that the Chinese themselves would prefer not to use military violence. as it was for Deng with Hong Kong. Furthermore, it cannot be ignored how Europe represents China’s main trading partner and how the current economic growth situation is not promising. Above all, we need to reflect in the attempt to avert the cold war between divergent blocs and to help what is left of the precious multilateralism.

At the same time, however, there are different assumptions and scenarios. The first is precisely that linked to the growing multipolarity in the area. As written last week on these pages, we must not only consider Beijing and Taipei, but also the US exercises between Tokyo and Seoul and Pyongyang’s responses. The Pacific vase continues to fill dangerously.

Furthermore, on the one hand there are the Kinmen and Matsu Islands, geographically much closer to the People’s Republic than to the Republic of China, which could be a first step towards “reunification”. On the other hand, there is the delicate situation of Xi Jinping, re-elected with more power than ever but with two failures on his shoulders in foreign and domestic politics boasted as great successes: from friendship with Putin to Zero Covid policy. If we add to this the economic crisis and the increase in global tensions, according to various analysts, the CCP would tend to find legitimacy in issues very dear to public opinion, such as reunification with Taiwan and the defeat of the West after centuries of humiliation and imperialism.

In 2013, when the President took power, a survey of 10 Chinese cities showed that only 6% of Chinese were in favor of armed reunification. Just three years of “New Chinese Dream” later, this percentage exceeded 85%. According to Qi Dongtao, of the East Asian Institute of the National University of Singapore, today more than 50% of the Chinese support armed reunification. Those who think so are usually a well-educated urban male and Party member. The social basis of Beijing’s “wolf warrior diplomacy” is rooted in these data.

A wolf-like diplomacy that is also very present online. A few months ago a post on weibo released by the National Liberation Army account read only: “Prepare for war”, receiving over 300,000 likes in twelve hours, with 19,000 ultranationalist comments such as “we must keep in mind the fundamental responsibility to prepare for war and to undertake the journey of a strong army “.

Despite the greatest perplexities, according to William & Mary’s Global Research Institute, the invasion will not be imminent. The analysis, taken from the Teaching, Research & International Policy (TRIP) project, aggregates the views of over 4,500 US international relations scholars. This same crowd of researchers predicted the Russian invasion of Ukraine a month earlier, while for Taiwan it predicted the US abandoning its strategic ambiguity. In fact, 72% were convinced that Washington would intervene militarily in the event of an attack and a few months later Biden declared that he intended.

As reported here on Fanpage, despite the differences, the Ukrainian situation is experienced with a certain empathy by the islanders, who perceive a greater danger than in the past. Today less than half of Taiwanese (37%) believe there will be military intervention and 56% believe war is avoidable in dispute resolution. However, according to the Taiwanese Public Opinion Foundation, more and more citizens are convinced that – also thanks to the Afghan defeat – in the event of a Chinese military aggression against them, the Japanese will intervene and not the US. The Economist instead pointed out that before the Ukrainian conflict broke out, the Taiwanese willing to fight were just 40% while now they are 7 out of 10, almost double.

Biden and Xi will see each other next week in Indonesia, it would be the first meeting in almost two years. Certainly among the central issues will be Taiwan, human rights, Ukraine and the impact of sanctions. The official purpose is to build common ground and resume communications to avoid a direct confrontation, even if the feeling, more and more widespread, is that now we are no longer talking about an “if” but only a “when” and a “how”.

Videogames entered his life in the late '80s, at the time of the first meeting with Super Mario Bros, and even today they make it a permanent part, after almost 30 years. Pros and defects: he manages to finish Super Mario Bros in less than 5 minutes but he has never finished Final Fight with a credit ... he's still trying.
Previous Juve, Vlahovic and Chiesa partially in a group: towards the call-up with Lazio. Locatelli in doubt | A league
Next Sean Penn and the Oscar to Zelensky: does the star endorsement really work?