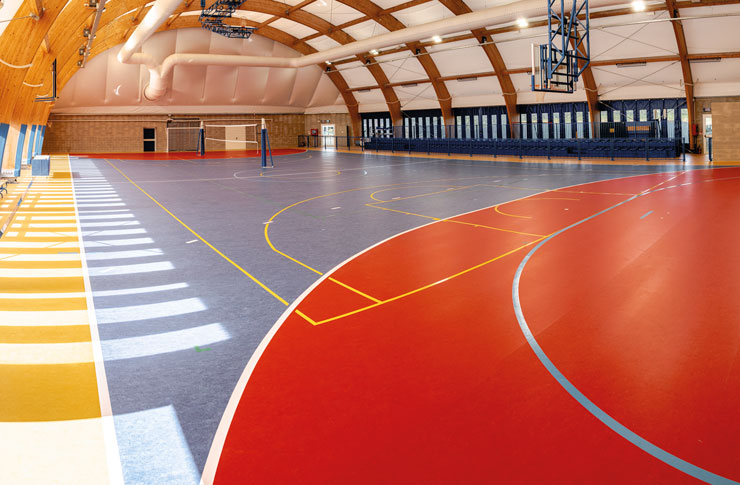 With Vaneton, here is the new gym in Reggio Emilia for hockey and much more

After a troubled period by the pandemic that slowed down the construction site of the Province of Reggio Emilia in via Makallé, between the field hockey field and the school complex, the gymnasium was inaugurated on 20 October, built with the structure in lamellar arches. in great light and double cover sheet.

The new sports facility, although born to serve the nearby schools, has a strong connotation of openness to the cityand in particular to the athletes of the Città del Tricolore field hockey, a sports club that will have the structure under concession for 20 years and has financially contributed to its realization.

Also to be able to host a regulation hockey field, the gymnasium is large: 44 meters long, 29 wide. In addition to the hosts, the facility will host the youth sector of the Reggiana basketballthe first team ofOlimpia Regium who plays the national championship of Serie B in 5-a-side football, the Rebasket who disputes the championship of C silver, ei Celtic Boys playing five-a-side football for men and women.

For a facility destined for such a wide use – designed by Studio Guidetti-Serri – the works relating to the sports surface have been entrusted to Vanetonwho laid the Linolwood elastic flooring.

The game area, by 1,050 sqmis made with the system, for multipurpose sports use, composed as follows:

For the different types of sports that can be practiced, they have been performed with different colorsthe markings for hockey, basketball, five-a-side football, main volley and two secondary volleyballs across the pitch.

The lateral portions of the field, and the area of ​​the grandstand, equal to 260 square meters of surface, were treated with a waterproofed cementitious substratefinished with 3.2mm linoleum flooring.

The testimony of Marco Bonacini

Our Amateur Sports Association deals with the promotion and competitive practice of field hockey in the city of Reggio Emilia. It currently has 10 teams between men and women and both senior teams play the A1 national championship.

In order to carry out the activity, we decided to equip ourselves with a synthetic grass field of 100 by 50 m and a gym for indoor activities.

To build the gym, which we will manage for the next 20 years thanks to a decisive and substantial financial contribution to the Province of Reggio Emilia, we chose the Linolwood solution because we wanted comfort and protection to the traumas that only an elastic flooring is able to offer to casual and professional sportsmen. Our field hockey players are used to running outdoors ten months a year on synthetic grass pitches laid on elastic mats. To reduce joint, muscle and tendon trauma when doing activities in the gym is very important that use an elastic surface such as Linolwood.

We therefore turned to Vaneton, with whom we have been collaborating with satisfaction for 30 years also for the synthetic turf, after having seen some of their creations in gyms in the area that after decades were still in good condition, thanks to the scratch and abrasion resistance linoleum versus parquet, which we were evaluating as an alternative. We used the wide range of colors to distinguish areas from the pitch and the sidelines. In this way we have achieved the desired aesthetic effect and we have increased in athletes the perception of where they are during the competitions. The blue coloring of the field and red of the area also allow a perfect view to athletes, referees and the public of the hockey ball which is white.

The basketball and 5-a-side football teams, which use the rented facility in our free spaces, have already grasped the benefit to do activities in our gym, as well as the teachers who use it in the morning with their students, especially those less sporty and less physically structured, who are not used to running and jumping on “hard” floors.

Videogames entered his life in the late '80s, at the time of the first meeting with Super Mario Bros, and even today they make it a permanent part, after almost 30 years. Pros and defects: he manages to finish Super Mario Bros in less than 5 minutes but he has never finished Final Fight with a credit ... he's still trying.
Previous Jessica Alba in Sicily, the Hollywood star in Agrigento
Next WhatsApp down throughout Italy, the messaging app is back to work after two hours of blocking